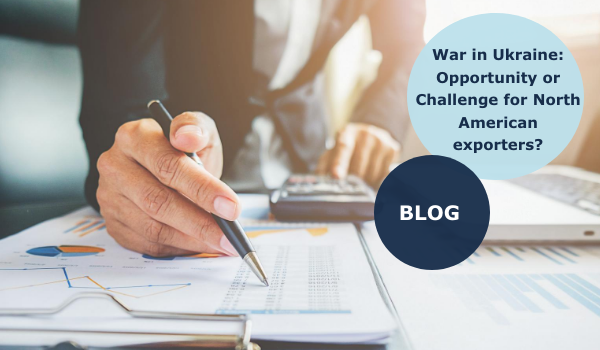 War in Ukraine: Opportunity or Challenge for North American exporters?

The world economy faced a supply shock on multiple fronts: supplies of fossil fuels, wheat, potash, nitrogen fertilizers, and industrial metals. As a result, prices are rising, and supply shortages will inevitably reduce activity in those sectors. Since the war is happening in Europe, many expect its greatest impact here. With the most important trading partner Russia being out of the picture, how can North American companies fill in the gap?

Is Europe facing the Ukrainian crisis or general inflation?

Being the second-largest country in Europe, many expected that its influence on the economy will be devastating. And even though war effects are undeniable, Ukrainian GDP in the EU is negligible. In 2021, GDP in Ukraine was 164.52 USD Billion. This is less than 1% compared to 14.45 trillion euros of GDP in the European Union.

How can North American exporters benefit from the current situation?

With 192.6 billion cubic meters or 81% of total exports, Russia was the most important natural gas exporter in 2021. The main imports from Russia are oil (27%), coal (47%), and gas (41%). And now the crisis disrupted bilateral trade between Russia and the EU. Europe is trying to find a fast solution for gas imports because at the moment, that has been excluded from the scope of sanctions. The main challenge there is the specific infrastructure that is needed for the gas import. However, Germany made a bold announcement that they are planning to stop importing gas from Russia by the end of the year. Even if the rest of the EU countries continue with this sanction exclusion. It seems that Europe will have to find a quick solution. On the other hand, North America was stocking gas to deal with domestic demand. This creates the perfect opportunity for North American companies to fill the gap.

The war won't be affecting only gas import and export infrastructure, but also the food and beverage industry. Russia and Ukraine are significant suppliers of wheat (28% of the world's supply chain) and sunflower seed/oil (72%). The biggest impact will be on the bread, beer, and snacks companies. Businesses dependent on these are worried about inflation because they barely recovered from the crisis caused by the pandemic. We can expect global re-calibration and re-allocation of food and agricultural imports and exports, which creates an opportunity for North American players. The expected price increase is ranging from 16% to 19% in food services and retail grocery companies.

And even though all Ukrainian ports are still closed for inward and outward passages, the rest of the harbors in Europe are fully open and untouched. Therefore, the trade can be done without disruption.

On another positive note, analyzing all the geopolitical crises in the past, we can be sure that the US dollar will strengthen again. In the 2014 Ukraine crisis, the dollar against major currencies rose by 8.7% from February to December.

Lastly, the American military complex can hugely benefit from the conflict in Ukraine. If the war continues, the US and other NATO countries will keep providing weapons to Ukraine. And since the war created great fear and anxiety among European countries about the security, which will increase their dependence on NATO, therefore the USA.

The legacy of war will be long-lasting, and it will shape Europe's economy in the upcoming years. The final results depend merely on the war's duration. Without a doubt, war disrupted Europe's path to energy independence. There is a shift in just-in-time and just-in-case delivery for adjacent industries in Energy. Considering that Europe doesn't have another gas supplier at the moment and that North America has been stocking to deal with domestic demand, this creates an opportunity. North America will have a huge international competitive advantage. The main focus should be on France and Span where the infrastructure needs to be built.

In the best-case economic scenario, with a rapid peace agreement, the economy in Europe will find its way to return to a balanced growth path. Jean Monnet wrote: Europe will be forged in crises and will be the sum of the solutions adopted for those crises.