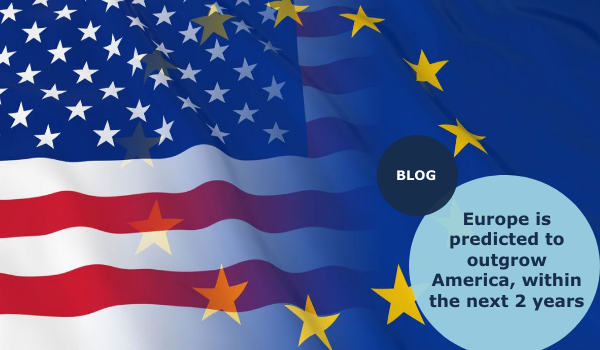 Europe Is Predicted to Outgrow America, within the Next 2 Years

Since the start of the pandemic, the global economies have seen a rapid decrease, but 2022 seems to be a promising year where the economies will rapidly grow again. Positive news especially for European countries where analysts believe that the eurozone economy would grow at a faster rate than the US economy over the next two years is mainly attributed to a divergence in government policies.

Even though it seems challenging for the European economy to grow fast again, there are mainly two variables that contribute to this. Firstly, most countries in Europe have decided to ease the restrictions put in place during those years since the start of the pandemic. Despite the discovery of the omicron variant nearly the end of 2021, the majority of countries were able to start 2022 without a lockdown which held back any more economic shocks from happening since the beginning of the new year. Additionally, as Stehn, Goldman’s chief European economist, said “European fiscal policy is likely to remain accommodative this year, in contrast to what some economists predict for the United States”.

Moreover, as decided in 2020, the European Union will devote $849 billion to the Eurozone governments which are expected to invest the money to revitalize the economy of their country. The EU started disbursing these funds near the end of 2021 and they will continue to be released throughout 2022.

On the contrary, the situation in the USA seems to be more uncertain. There are still doubts that the “Build Back Better” plan emitted by Joe Biden will become reality. The investment predicted should be $1.8 trillion but discrepancies among legislators pose a threat to the entire project.

Furthermore, the economy in the eurozone is more stable than the US economy because, during the last months, inflation has risen both in the EU and the US, but in the eurozone, it didn’t increase as much. In November 2021, the US had its highest increase in inflations since June 1982, which might impact the earnings of US-based companies. On this matter, Jan Hatzius, chief economist at Goldman Sachs, said that “Growth needs to slow in the U.S. to ultimately get inflation back down to something like 2%”.

Overall, Europe seems to have a more stable economy than the US, which eases the process for US companies expanding into the European market.

EuroDev, established in 1996 with offices in The Netherlands and France, has a single, defined purpose to help North American companies expand their business in Europe. We have created a proven, successful business development model and since our founding, have partnered with over 300 companies to help them define and meet their European business goals. Services provided include Sales Outsourcing, HR Outsourcing, and Digital Marketing.