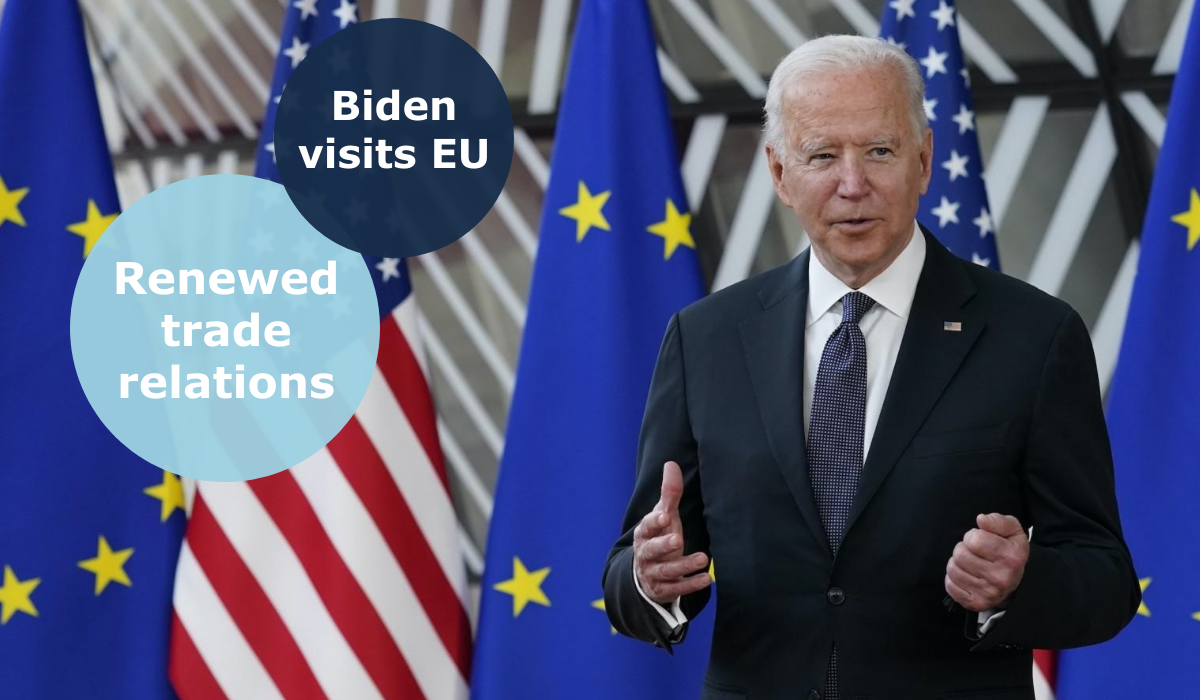 In June, Joe Biden visited the EU in his first overseas trip as US president. He met with diplomatic leaders at the G7 summit and NATO ministerial. Main purpose of the trip was to “strengthen the alliance, making it clear that Europe and the United States are tight.” Topics on the agenda were the fight against COVID-19, cybersecurity, defense, climate and trade relations. What this means for US companies who (want to) do business in Europe, you'll read below.

In a Washington Post article preceding his trip, Biden wrote: “In this moment of global uncertainty, as the world still grapples with a once-in-a-century pandemic, this trip is about realising America’s renewed commitment to our allies and partners, and demonstrating the capacity of democracies to both meet the challenges and deter the threats of this new age.” According to EU diplomatic leaders this goal was met, but there are still a lot of steps to take to renew the relationship.

The EU and US represent 780 million people who share democratic values and the largest economic relationship in the world. At the EU-US Summit on June 15th, a joint statement was released (Towards a renewed Transatlantic partnership) in which the allies declared to strengthen trade, investment and technological cooperation, amongst other goals.

A Trade and Technology Council (TTC) is to be established, whose goals will be to grow the bilateral trade and investment relationship. Multiple working groups will focus on technology standards cooperation (including AI and IoT), green tech, export controls, promoting SME’s access to digital technologies and strengthening our most critical supply chains.

Biden also spoke with UK’s prime minister Boris Johnson on updating the Atlantic Charger, a declaration of their commitment to work together to realise their vision for a more peaceful and prosperous future. Since the UK is no longer a part of the EU after Brexit, separate trade agreements between the US and UK and between the EU and UK need to be invoked.

Global minimum tax – or not?

Biden’s push for a global minimum tax on multinational corporations faces opposition in the US. G7 finance ministers agreed before the summit to pursue a global minimum tax rate of at least 15% and to allow market countries to tax up to 20% of the excess profits - above a 10% margin - generated by about 100 large, high-profit companies. Republicans came out against the plan, potentially complicating the US ability to implement a broader global agreement, according to Reuters.

Promising outlook for US exporters

All in all, the outlook for US companies who export to Europe is promising. But as we all know, politics may take their time to actually work out rules and regulations. Good news is that US citizens can travel to Europe again and traveling within Europe has also opened up again. At EuroDev, we'll keep an eye out for our North-American partners and keep you up-to-date about improved opportunities.

Are you ready to expand your business into Europe? Since 1996, EuroDev has helped over 400 North American companies with their European expansion through a variety of services (Sales Outsourcing, HR Outsourcing, Digital Marketing and M&A). Interested in discovering your growth potential in the EU? We’re here to help. Schedule a call with one of our experts today.