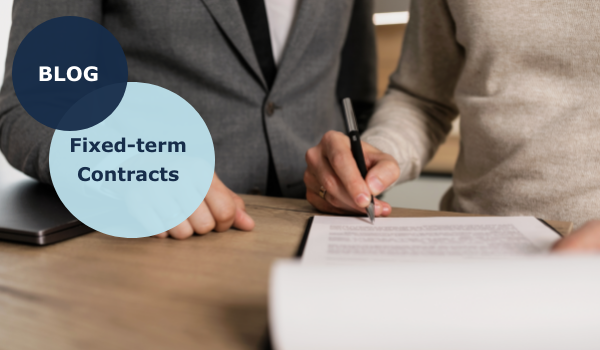 Length of contract
There are two different types of a fixed-term contract in Germany – with reason (mit Sachgrund) and without reason (ohne Sachgrund).

Fixed-term contracts with reason or “objective grounds” need to be justified by the employer prior to signing the contract. Objective grounds include temporary increase in the work volume or having to substitute for an employee who is temporarily absent (sick or in maternal leave). There is not a maximum duration stipulated in law in regards to this type of contract, as the point is to fulfill the temporary need of the employer for as long as it exists.

On the other hand, fixed-term employment contracts with no objective grounds are subject to stricter rules. For example, the consecutive renewal of such contracts is limited to 3 times that cover a span for not more than two years altogether. Employers need to look out for several implications:

A fixed-term contract under German law ends automatically at:

No notice period is needed, unless exclusively specified in the contract. However, make sure to keep track when the contracts expire in order to prevent assigning work to a temporary employee, whose contract has already ended.

The use of fixed-term contracts in France is governed by law. In comparison to Germany, this type of contract may only be used provided that there is an objective reason, among which:

A fixed-term contract may be renewed if explicitly stated by a clause in the contract,  twice for a maximum period of 18 months, unless otherwise provided for in a collective agreement if applicable.

When the fixed-term contract for a position expires it can only be renewed with due observance of a waiting period, that is decided upon by taking into consideration the length of the employment relationship. This is in case the employer still needs to fill the same or identical position, or offer a second fixed-term contract for the same employee. There are only certain  cases in which this rule can be disregarded, listed in the French labor code, for instance when the contract is for a seasonal job or emergency work, required for security measures.

It is preferable to send a written notification by registered post with a notice.

Neither party may terminate it prior to its end, unless still in a trial period and except in the event of an amicable separation, serious misconduct (“faute grave”), force majeure or if the employee finds alternative employment under an unlimited contract. There are minimum requirements for the duration of the contract. An employee cannot be dismissed if the employee they have been hired to temporarily replace returns prematurely to work.

Upon dismissal, employers are obliged to pay fixed-term employees an end-of-contract instability of work bonus amounting to 10% of the salary.

In Denmark there is no legal limit for the maximum number of successive fixed-term contracts, however The Confederation of Salaried Employees and Civil Servants in Denmark states that usually 2 successive renewals can be based on objective reasons. More than 2 renewals poses suspicion of breaches of, for example, the Salaried Employees Act, and could be declared null and void by the court unless proven otherwise. The standard maximum duration in practice, but not by law, would be 2 consecutive years.

Unless renewed, fixed-term contracts terminate automatically on their expiry date or upon completion of the specific t asks. Both employer and employee can terminate the contract at any time due observance of any clauses in the contract or following the same rules as in the case of indefinite-term contract. Provisions on termination must appear in the contract, the period of employment and thus the time of termination of employment should be specified precisely. This is also the case for including a section on prematurely ending the contract before the fixed date with a notice period. It is done in order to avoid doubts about notice or reasons for termination.

Interested to learn more about fixed-term contracts? Please do not hesitate to contact one our of European HR experts!

EuroDev, established in 1996 with offices in The Netherlands, has a single, defined purpose to help mid-sized North American companies expand their business in Europe. We have created a proven, successful business development model and since our founding, have partnered with over 300 companies to help them define and meet their European business goals. Services provided include Sales Outsourcing, HR Outsourcing and Digital Marketing.